Saint Benedict Center's main site is Catholicism.org: An online Journal edited by the Slaves of the Immaculate Heart of Mary, Richmond, New Hampshire.

Saint Benedict of Nursia, our Patron, and the Father of Western Monks.


The brothers and sisters of Saint Benedict Center are happy to live in the bucolic old New England town of Richmond, New Hampshire. It offers an atmosphere of peace and quiet, where the beauties of God's creation serve to remind us of the supreme Beauty that is the Father, Son, and Holy Ghost.

Saint Benedict Center's monastery, convent, chapel, and affiliated school are good for Richmond. We love our neighbors and we love our town, which we want to remain rural, green, and friendly ... and to become holy!

Richmond was granted in 1735 as Sylvester-Canada, named for an Indian fighter, Capt. Joseph Sylvester of Scituate, Mass., who was killed in 1690 during an attempt to capture Quebec.

At first it was part of Massachusetts. The boundary was changed by the king of England, placing the area in New Hampshire, and the area was regranted in 1752. It was also renamed Richmond in honor of Charles Lennox, Duke of Richmond, a friend of then-Gov. Benning Wentworth.

Hosea Ballou lived in Richmond; he was a leading 19th-century champion of religious liberalism and is considered the father of Universalism in the United States. Eliza Ballou Garfield, mother of the 20th president of the United States, James A. Garfield, was born here.

At the center of town, called Richmond Four Corners, is a brick Greek revival-style church built in 1837. Nearby is Veterans Hall, the town meeting hall.

The town has retained its quiet rural character while growing in popularity as a residential community. Since 1921, it has been home of the Cheshire County YMCA's Camp Takodah.

Catholicism.org » From the Laptops

Converted by the Resurrection

By Brother Francis, M.I.C.M.
We are indebted to Sister Anna Maria, M.I.C.M., of the Vienna, Ohio community, for transcribing the following from one of Brother Francis’ recorded lectures.
Difficilius est id quod non sit incipere quam id quod fuerit iterare. And it’s translated, “It’s more difficult for that which had never been to start to begin, than that which had been, to be brought back.” In other words, the fact that we were created is more surprising than the fact that we are going to be resurrected from the dead. That’s the point Minucius Felix, a pagan Roman, was making when he used this quote from Octavius, a Christian of the age of the catacombs, the first Latin apologist. In his work, Felix was recounting a dialogue between the Christian, Octavius Januarius, and the pagan, Caecilius Natalis, at the seashore in Ostia on a Roman holiday in the time of vintage.
The argument proceeded. The first one to speak was Caecilius (a pagan of the second century) and in a very suave, clever way, he presented the argument against the Christian religion from the point of view of a Roman. He insisted that man has a duty to uphold the religion of his ancestors. A false principle, but an attractive one. There are an awful lot of people today who go on living in the wrong religion, just because they think they have the duty to be loyal to “the religion of my grandparents, of my father, or my mother, or my good aunt, or good uncle.”
Now, is loyalty to father and mother and aunt, and relatives, and country a bad thing? No, it isn’t. As a matter of fact, this kind of loyalty is the greatest thing in the natural order, and the only thing it has to yield to, is God.
That same issue that arose among these early Romans of the second century, would arise in the eighteenth century, the century in which the anti-Catholic Masonic conspiracy arose, the century of Voltaire, Rousseau, and Diderot, the century of Adam Weishaupt, and Jacob Frank. It was also the century of Saint Alphonsus Maria de Liguori.
In that century a very respectable theologian established a false principle in a catechism that was going to be taught in Italian schools. He was trying to placate the Masons, the Carbonari, who had their hand in public education throughout Italy at that time. Italian Masons didn’t become atheists and they certainly didn’t become Protestants. They claimed to be Catholic, even though they were bad Catholics.
So, according to this theologian and his catechism, the principle was that “one has to be true to the religion of his fathers.” Therefore, “one has to be true to the Catholic Faith.” Saint Alphonsus Maria, when he saw that sentence, was absolutely furious! He said, “That is a false principle; Catholics do not talk like that. If this statement could be true in Italy, it must be true in Turkey! So, are you saying that the Turks have the duty to go on being Moslems? Are you saying that the Chinese have a duty to go on being Buddhists?”
So, Saint Alphonsus Maria de Liguori, God bless him, blasted this theologian and raised quite a crusade against him. He said, “That’s wrong! You can’t say that!”
Now here, in the Dialogue, we find Caecilius saying that it’s patriotic to worship the gods approved by the Roman senate. As a matter of fact, Rome was so generous and so broad-minded in apostolic times that the biggest problem that Saint Peter and Saint Paul and the Christians had when they came to Rome, most of them to shed their blood, was not the bigotry of the Romans, but the broadmindedness of the Romans. They invited the Christians to have a statue of Jesus placed in the Pantheon, the temple of all the gods. “No, thank you!” said the Christians. If Jesus Christ entered the Pantheon, all the other “gods” must go. He is not “a god,” He is the only God, one in three Persons, with the Father and the Holy Ghost. 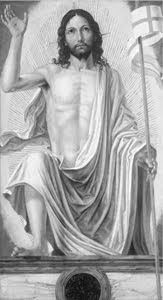 Resurrection: The argument of the Dialogue was finally mooted on one issue. Who in the world could believe that, after this body is disintegrated, it’s going to be gathered and brought back to life? So, it came down to the Resurrection of the body. That was the big scandal to the pagans. So, it is today with the rationalists, materialistic scientists, and false philosophers. How many physicists, chemists, geologists, astronomers, in our universities believe in the resurrection of the body? I met a Teilhardian once who said to me, “Do you mean to say that the cadaver of Jesus was brought back to life?”
To the rationalist the subject of this incredulity isn’t just the Resurrection of Jesus Christ, who is God, the first fruit of His own victory over death. It is all those who would be united to Him by the Eucharist, by the Faith, by Baptism, all of those who will be resurrected in glory through His glorious Resurrection. It is the challenge for our mind, but it is the only hope that we have! If we lose faith in the Resurrection, then there is nothing left but pagan despair. And pagan despair leads to degeneracy, the very degeneracy that is taking over our country, taking over the whole world today.
Is the world pagan today? I think we owe an apology to the pagans! Minucius was a pagan, but there was some decency about him. At least some of the pagans of Rome and its empire had natural virtue, natural ideals. They would be converted, and from among them there were millions of martyrs in the first centuries of the Church. When a Christian society falls, they don’t fall back to nature; they fall to un-nature, to abnormality, to degeneracy! Corruptio optime pessima est (the corruption of the best is the worst). And the only way to save nature today is to be supernatural, because grace builds on nature and shows the beauty of nature.
“Can you, Octavius, really convince me, Caecilius, a well-educated, reasonable man, a philosopher, that Jesus Christ rose from the dead, and therefore, that all of us can rise from the dead, that there is such a thing to look forward to — that we will exist forever”? Just imagine discussing a point on which there is so much at stake!
Just imagine the difference between dying like the rabbits, and going on like gods, forever, children, sons of God, forever! You’d think we are talking about some point that you could settle in one way or the other. What difference does it make? It makes all the difference in the whole world!
So it was at that point that this sentence was uttered: It’s more difficult for that which had never been to start to begin, than that which had been, to be brought back. And — Deo gratias! It converted Caecilius. He became a Christian.
“Supposing,” said Octavius, “you were a sheer angelic intelligence and were allowed to look over and see this earth, and you saw the wind blowing and the trees, the rabbits running around and the dogs and the pigs and everything. And then somebody told you that out of that same mud we are going to make the kind of being that you are, a rational, spiritual, intelligent person. Would you think it were possible?” He said, “No, I wouldn’t.”
Octavius replied, “But you know this is a fact. Not only could no man have done it, no man could have even conceived it possible!” So, he said, Difficilius est id quod non sit incipere quam id quod fuerit iterare. What a beautiful classical sentence! Is it not more difficult to have put that amazing being, which is in fact what you are, in existence in the first place, than having existed, to restore it? And at that point, Caecilius was converted to the Catholic Faith, on the issue of the resurrection!
I hit that story just on the week of the Resurrection, and I thought it was a little grace that I should be telling you.
Posted by Site Administrator at Thursday, June 03, 2010